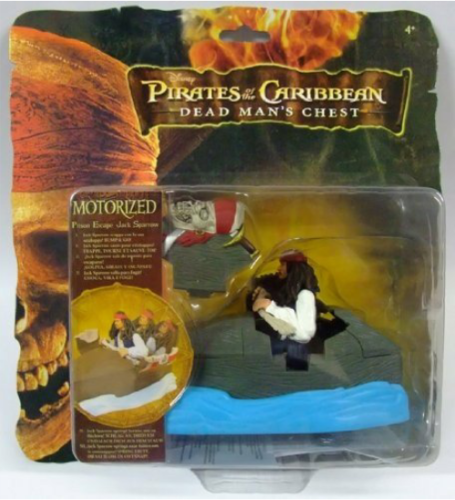 The days of Pirates ruling the seas are coming to an end as the British Navy tames the Caribbean. But pirates donât go down without a fight. Battles will be fought, dark forces and dangerous creatures of the sea will push back on the modern world - and the crafty Captain Jack Sparrow will make his stand..Jack owes a debt to Davy Jones. With time running out, Jack must find a way out or else be doomed. The question is "Who will control the seas?"

With the Pirates of the Caribbean collection you can own the action, and rule the sea!

Replay your favourite scenes straight from the movie with the Rowing Pintel  Bump'n'Go. Prison Escape Jack Sparrow.See the character react as they collide with any obstruction, and then spin off in a new direction!

Before Purchase & After Sales Info

-We Strive for 5 star feedbacks. We sell all products in good faith. If any issues do arise please do let us know.

-All orders are sent Same day or next Working day.

-If you urgently require the product to be sent same day. Please Email us and wait for confirmation from us before purchase.

If you not happy with your purchase. You can send back within 30 days. Provided the product is unused and in original condition. With all Packaging Material. Before returning product. Please get in touch with us. So we can advise you and Give instructions on how you can return the product. When returning your order. Please leave us a note inside with your ebay id and item number.